The Battlefield is an area shrouded in mystery. Situated between the Wooded Valley and the Sandstone Bridge. Scattered all around a townsmen will find Rusty Equipment and large mounds of dirt. It is thought that The Camps and the Town had a battle here; however, only Town-made weapons, and tools can be found here. Was the battle over valuable resources and treasure? Or is there a deeper story not yet told, just waiting to be discovered. Only time will tell.

Many Rusty Tools can be found scattered on the Battlefield such as swords, Axes, shovels, and Shields.

This is a good place to find tools and weapons for beginner townsmen to start off with. Placed next to a small worn down building is one of the many Map Boards. Once activated, a townsman is able to see more of the Towns locations that can be explored.

This area is inaccessible until the Sandstone Bridge is Repaired. 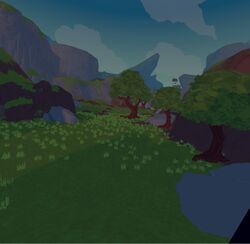 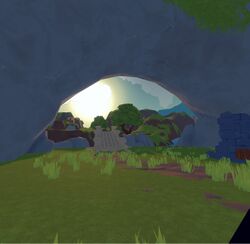