The Assembly Deck is an item introduced in the 0.0.45.0 update that allows players to craft objects that assist the player in their daily travels.

The Assembly Deck can be found in the Crafting House, which is located between the main market and Training Grounds.

The primary function of the Assembly Deck is to craft complex objects that the hand-crafting system cannot provide for. Another function of the table is decrafting complex objects, similar to the Deconstructor. In order to use the assembly deck, a page must first be taken out of the Recipe Book by gripping the desired page from the top and pulling it out. The page can then be inserted into the page-holder sticking out of the left side of the deck.

There are many items that can be used on the Assembly Deck, here are some of the major items:

Using this table requires a long series of steps to be followed in order to get the result you desire.

The tools of this table are the hammer and chisel. However, this station requires more dexterity and finesse than Carpentry and Smithing.

Most parts need to be nailed in with ethereal nails that appear when you supply the appropriate part. 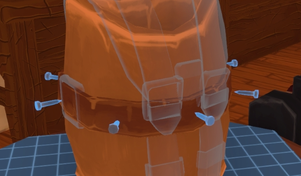 These nails must be driven in with precise strikes upon the flat head. Any awkward impacts will "bend" the nails, potentially increasing the difficulty of driving in the nail.

These nails also act as a sort of "shield" for the part. If you strike too hard, dealing more damage, you may potentially overcome the shield of the nail and damage the part. Once the part becomes too damaged, signified by red cracks along the surface, it will break and destroy the part that you supplied.

Retrieved from "https://townshiptale.wiki.gg/index.php?title=Assembly_Deck&oldid=560"
Categories:
Cookies help us deliver our services. By using our services, you agree to our use of cookies.